As far as life’s illusions go, victim mentality is by far the one that requires the most thought and is not just a vital part of the breakthrough process and of awakening, it is a prerequisite. There can be no breakthrough without waking up from this illusion. Remember that illusion here means a perception that is not true not matter how logical or common it may be.

If you want to breakthrough to your next level, be it in matters of money, relationships or health, you will have to conquer this illusion.

Most people think they know what victim mentality is, but they don’t. You may be one of them.

What is a paradigm?

A paradigm is like a “lens” through which we perceive everything we see. Said differently, a paradigm is a sort of filter through which all the data (i.e. life) passes through on the way to the mind where it gets perceived, has meaning attached to it and then a “conclusion” is drawn from the perception that is then acted upon. To illustrate this, imagine that when Johnny was born, the doctor attached green lenses to his eyes. By the time Johnny is 30, how does Johnny see the world?

If you said green, you wouldn’t be wrong because that is the truth. But it wouldn’t be true for Johnny. You see, Johnny would just see the world. He wouldn’t know that everything that is passing through his eyes is getting “coloured” by the green lenses. Not only that, but if you told him that he was actually seeing green (because you know about his lenses – ie the truth), he would probably get very impatient and even aggressive with you. You would be challenging his model of perceptive reality. In terms of this example, Johnny has a green paradigm.

Said differently, someone with an entrepreneurial paradigm will perceive business opportunities wherever he/she goes.

Said differently, it is a paradigm where I am separate from everything else. If you’ve ever heard the saying “we are all one” or “we are all connected”, this is the paradigm of the opposite, “I am me and you are you” or “it’s me against the world”.

What people don’t know about victim mentality is that it is a bracket or range or bandwidth of vibrational frequency. Someone in that paradigm will only attract another person in that paradigm. Matching frequencies will attract opposing gender (male/female) or polarity (positive/negative).

These positive and negative polarities are not merely extreme points on this axis, the victim and the rescuer are archetypes or roles and as such they have identities.

Since they are both on the same axis, both of them believe that stuff/life just happens to them. They both have victim mentality. When it’s pleasant, they feel “lucky” and when it’s not pleasant they are either unlucky (when there’s no one to blame) or they are “right” with proof and usually resentful (when there is someone to blame).

Initially, both think with a tone of bewilderment and possibly despair “why did this happen to me?? Why me??!” It’s only after that that the rescuer gets really positive (but still resentful) and the victim gets really negative. These two will always attract each other in relationships. Just like magnets, the positive and the negative attract.

The story always unfolds the exact same way and without fail. See if you can identify yourself.

In the relationship, something bad will happen to the victim. The victim will tell the rescuer. The rescuer, who when life throws lemons makes lemonade, jumps to the rescue and takes control of the situation and does whatever he/she needs to do in order to “fix” everything. The victim gets really grateful and expresses this to the rescuer and everything is just dandy.

It’s actually quite a pleasant interaction because both archetypes have their roles met and if this is a romantic relationship, it feels like true love.

The victim, who somehow is always getting screwed over by life, receives empathy and gets rescued and feels like there is someone who really understands their predicament and says something like ”I don’t know what I’d do without you”.  The rescuer, who has a genuine desire to help, gets to feel needed and appreciated and says something like “I’ll always be here for you and I’ll never let anything bad ever happen to you”. This is how he/she does good in the world. Unfortunately, this doesn’t last.

A bit later in the relationship, the same thing will happen but this time, the rescuer does not rescue. For whatever reason, whether busy or wants the victim to make a plan and deal with it or just simply is not available, the victim is denied his/her role, and then panics.

Conversely, something happens to the victim and the rescuer wants to rescue but for whatever reason, busy, lazy, watching TV, the victim is not available to be rescued, the rescuer is denied his/her role, and then panics.

When both these archetypes are denied their role, each will “slip” into a third archetype called Tyrant. 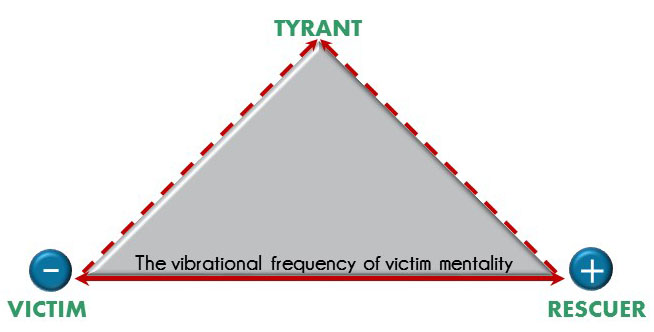 When the victim slips into tyrant, the victim-tyrant will try to elicit pity from the rescuer and will say things like: “you don’t understand how hard I have it! I had such a terrible [childhood/marriage/day/night/week/experience/accident/etc], you can’t imagine what I’ve been/I’m going through” basically listing all the reasons (the proof) why it’s not their fault and why the rescuer should feel sorry for them and just get on with the rescue like all the times before.

When the rescuer slips into tyrant, the rescuer-tyrant will try to elicit guilt from the victim and will say things like: “do you know where I’d be in life if it wasn’t for you? Do you know what I’ve had to sacrifice for you? I could have done [a whole list of sacrifices] but I didn’t because of YOU!!” basically trying to bully or coerce the victim into the rescue so that that the rescue can happen like it did all the times before. The problem here is that the rescuer-tyrant can get really, really angry and this onslaught can be very aggressive and even violent.

If the narrative of the rescuer-tyrant sounds like something you’ve said often to someone in your life, you may very well be the biggest terror in the life of someone that you really care about and only want to help. It also means that you have victim mentality. You’re just on the positive extreme.

Now, if you’re feeling a bit freaked out because I described most, if not all, of your relationships, that’s ok, we all start out in victim mentality. Every single one of us. Here’s why.

We learn about the law of cause and effect and how that if we want a specific result (effect), we need to take specific action (cause). The problem comes when someone does something (cause) and the effect impacts us negatively. Logically, my detrimental situation is because of that person’s action. Conclusion: it’s not my fault, it’s their fault, and I have proof. This deductive logic is the illusion.

So what’s the problem with this illusion? Why not just be okay with the logic that my detrimental situation is because of someone else and be content with being right? Remember, there’s proof  😉

The problem is that there is no inner peace in this paradigm. Please read about Linear Time in order to understand more about the vital importance of a state of peace from a perspective of vibrational frequency. In this paradigm there is no peace because the rescuer and the victim are constantly blaming life, God or someone else that they can identify as the cause of their detriment and all that’s left after the blaming is despair and resentment which leads to bitterness and cynicism. Sustained resentment is the cause of many diseases.

In a nutshell, if you blame anyone for anything, you have victim mentality. It’s as simple as that.

If there is someone (dead or alive) that you blame for ANY of your pain, anxiety, sadness, sickness, financial or romantic loss, and you have a story in your mind where you have every justification to how you were the aggrieved party and they were to blame (proof), you my friend, have victim mentality.

Now, if your initial reaction is to stick to your justification story and also vehemently deny that you have victim mentality, then you have just experienced what Johnny experienced when you told him that he is seeing everything green.

If this is the illusion, what is the truth?

The truth is that we are creators of our reality, not victims of life’s circumstances. Everything that has ever happened to you, you have attracted by means of the frequency at which you vibrate.

I know that may be a large order to process, but it’s true and chances are that this is not the first time you’re hearing this. The law of attraction is widely known today and the amount of people who don’t know this are in the vast minority. If you are someone hearing this for the first time, welcome aboard the truth train. Absolutely everything vibrates. Everything in the universe from the tangible to the intangible is made up of the same thing. Atoms, and the atom is not a still thing, it is at least, a proton with a spinning electron and sometimes with a neutron.

Everything is vibrating and that’s how attraction is even possible. Believing today that things do not vibrate and that they are still is the equivalent to people once believing that the world is flat because that’s all their eyes could see.

Think about it for a second, doesn’t the very thought of knowing that you are responsible for everything in your life that has ever happened to you and that will ever happen to you and it has been necessary for you in your journey of life to make you into the person you are today, bring you peace?

Creator mentality is the only paradigm where there is inner peace and no blame. Now, don’t get me wrong, I’m not saying that if someone does something not cool to you that you should just ignore it and resort to saying “oh well I attracted it so it’s ok”, not at all. You did attract it, but you need to act. You need to learn whatever lesson is being presented to you and you need to adjust your thinking and your actions and you should definitely not just lie down and take nonsense from other people. But you need to look at all the people and circumstances in your life and realize that everything in your life, everything, the “good” people, the “bad” people, the positive experiences and the negative ones, absolutely everything is a manifestation, the direct attraction of the frequency at which you are vibrating.

Here is a table that clearly points out the differences between victim and creator mentality so that you can catch yourself and shift.

I will NEVER spam you or give out your email address.